The Black Tuesday Stock Market Crash of October 29, 1929 wiped out fortunes, destroyed lives, and decimated the American economy. Businesses failed, jobs disappeared, and families struggled over the next several years, with unemployment as high as 25%. Each round of industry or factory shutdowns caused more financial calamities. President Herbert Hoover took a laissez-faire approach to the situation, assuming business policies would eventually turn the situation around.

“The Road Is Open Again,” courtesy of Mary Mallory.

After years of cataclysmic financial woes, Americans looked to new solutions and more government intervention by the upbeat Franklin D. Roosevelt, electing him President in 1932. The United States Congress passed the National Industrial Recovery Act in June 1933 as part of Roosevelt’s New Deal to stimulate economic recovery and public spending. Roosevelt signed it into law June 16, 1933, and the government moved quickly to activate its policies. They devised the Blue Eagle as a symbol of businesses working together to make America stronger, using the catchphrase, “We Do Our Part.” The Public Works Administration organized projects to help improve infrastructure and get people working, while the National Recovery Act worked to foster fair trade, expand purchasing power, and increase employment by shortening work hours and increasing wages through codes regulating factories, industries, and businesses voluntarily following the Code. People in states like Oklahoma, however, thought that the Blue Eagle meant destruction and revolution, suspicious of anything from the government and convinced it was something communistic.

To help rally public support of the program, Roosevelt named Frank R. Wilson director of National Recovery Act propaganda, and John C. Flinn to lead film activities. Their job was to promote the benefits of the Act and garner enthusiastic participation in working together in support of it. The program was one of the first to employ media in promoting social messages, selling their mission through books, plays, and radio and particularly motion pictures and sheet music, the internet, Facebook, and twitter of their day.

Flinn organized meetings with Hollywood studio heads to gain film industry support for producing featurettes explaining the Act and highlighting its benefits to the American public. Each studio agreed to produce one short that would be freely distributed across the United States.
On September 2, 1933, Paramount hosted a screening of the first five short films produced: RKO’s one reeler starring Ann Harding, Fox Film Corporation’s “Mother’s Helper” with Zasu Pitts and El Brendel, MGM’s “Give a Man a Job” written by Richard Rodgers and Lorenz Hart and starring Jimmy Durante, Paramount Pictures’ short starring Charlie Ruggles and Mary Boland, and Warner Bros. “The Road Is Open Again.” Los Angeles Times film reviewer Edwin Schallert reported on September 4 that everything from light comedy to serious matter filled the program. The Warner Bros. short, “The Road Is Open Again,” “made a decided hit…,” impressing all in attendance.

A still for “The Road Is Open Again,” with, from left, Dick Powell; director Al Green; Charles Middleton (yes that is Ming the Merciless as Abraham Lincoln), Alan Dinehart and Samuel Hinds, from the Motion Picture Herald, Sept. 16, 1933.

The opening introduction introduces hope before launching into the chorus, which starts, “There’s a new day in view, there is gold in the blue, there is hope in the hearts of men… .” Happier times and sunny lands lie ahead thanks to the Blue Eagle, which sits on the shoulder of the President.

Mark S. Reinhardt, author of “Abraham Lincoln on Screen: Fictional and Documentary Portrayals on Film,” states, “The Road is Open Again” was intended to serve as a morale booster for Depression weary Americans, proclaiming that the figurative “road to prosperity” was once again open for travel.” The featurette shows songwriter Powell falling asleep while trying to write a song about the National Recovery Act, dreaming that he meets Presidents George Washington (Alan Dinehart), Abraham Lincoln (Charles Middleton), and Woodrow Wilson (Samuel S. Hinds), who each describe their contribution to America. They avow that Roosevelt is the right leader to get the country traveling down the road to recovery. This inspiration leads Powell to write the song upon awaking, whereupon he turns to camera, addressing the audience as he asks them to sing along on the chorus. The short concluded with newsreel footage of factories busy with activity, farmers harvesting abundant crops, men going to work, and images of Roosevelt, the NRA banner, and the American flag. 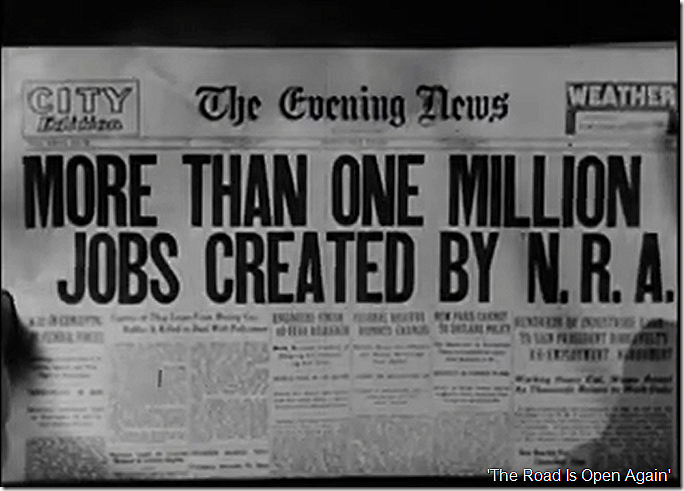 Patriotic Warner Bros. released two shorts in support of the NRA in 1933, “The Road Is Open Again,” produced on the West Coast, and the more serious, “The New Deal,” produced on the East Coast. Film Daily on September 8, 1933, reported that the studio would provide 1000 free prints to churches, theatres, and schools. National Screen Service agreed to handle distribution of each short free of charge as well. Morgan Lithographic Company donated 1000 one-sheets of “The Road Is Open Again” designed by Thomas Wiley and Duke Wellington for display.

The American public quickly embraced the song, buying the sheet music featuring Dick Powell and Franklin Roosevelt on the cover, and performing it as a patriotic rallying cry at meetings and productions. Tune master Al Jolson even sang “The Road is Open Again” on KFI September 14, 1933, after performing a skit saluting the Civilian Conservation Corps.

On Saturday, September 23, 1933, 39 radio stations (KFI, KHJ, KFWB, etal.) across the state of California dedicated their 8:30 PM – 9:30 PM programming to broadcast a special National Recovery Act program. Produced by KFWB and broadcast from the National Broadcasting Company on the RKO lot, the program featured Dick Powell as master of ceremonies, along with performances by the choral group, , the Three Pickens Sisters, and Metropolitan Opera star Grace Moore. Powell’s singing of “The Road Is Open Again” served as the show’s highlight. 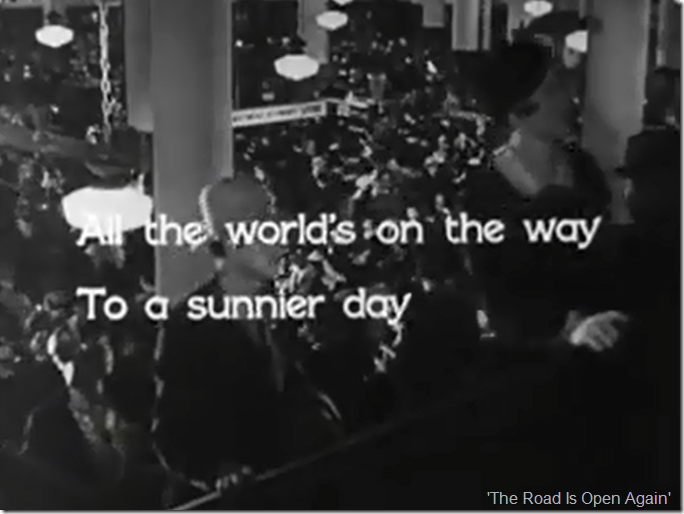 The escalator at the May Co. appears in “The Road Is Open Again.”


Newspapers around the country saluted the song and short. The Philadelphia Inquirer described the song as “stirring” in an October 28, 1933 squib. The Evening Huronite wrote on September 28, 1933, “The NRA is going in for real old-fashioned war-time tactics in the popular appeal to the public. A good idea used is that of the motion picture shorts. The best one shown to date is now running. It features a rousing inspiring modern patriotic song that is a knockout. We should all learn “The Road Is Open Again.” This is informative and serious and not something as propaganda for the cause.”

The American public and business remained strongly behind the National Recovery Act and the Blue Eagle into the spring of 1934, when confidence started breaking down. Many businesses began acting in their own self-interests instead of voluntarily following the Code, unions and industries began fighting, and the program’s effectiveness took a beating. Businesses which had ardently supported government intervention in 1933 turned away in 1934. The Supreme Court ruled the National Industrial Recovery Act unconstitutional on May 27, 1935, just before it was set to expire, ending all usage of the Blue Eagle and song.

It took several more years for the Depression to end, essentially at the start of World War II. Though the Stock Market Crash and Great Depression brought economic devastation to the country, Franklin Delano Roosevelt’s election gave people some reason for hope in 1932, as did the movies and songs like “The Road Is Open Again.” The world was a less cynical and dark one in the 1930s, one in which people looked more on the bright side of life and hoped for better things.