Posted on November 4, 2014 by lmharnisch 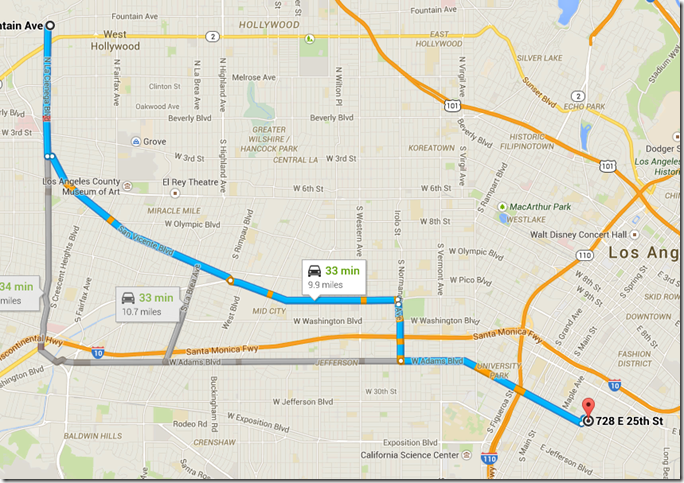 This Google map shows several possible routes from Georgette Bauerdorf’s apartment to the location where the car was found. Whoever took the car had any number of options on where to dump it. Recall that the car, a 1936 Oldsmobile, was found about 10 miles away, at 728 1/2 E. 25th St., out of gas with the keys in the ignition.

The Herald-Express described the neighborhood where the killer abandoned the Bauerdorf car as “a Negro residential district.” (Oct. 13, 1944.)

But as we saw in a previous post, 1940 census data show this was an ethnically mixed neighborhood. In the 1940 census, the side of the street where  car was found was 50% white, 25% African American and 25% Asian American. (At one point, investigators detained two African American men employed at the apartment complex whose only crime seems to have been “janitoring while black.”)

For comparison, this area today is 87% Latino, according to The Times Mapping L.A. Project.

Here’s the news photo of sheriff’s investigators examining the Bauerdorf Oldsmobile. Notice that the car appears to have been parked along the curb. Recall that it was out of gas, which raises the question of whether the driver coasted to a stop at the curb; pushed it into place (presumably leaving fingerprints or palm prints); or walked away with the engine running in hopes that it would be stolen. From our vantage point today, there is no way of knowing, we can only speculate. 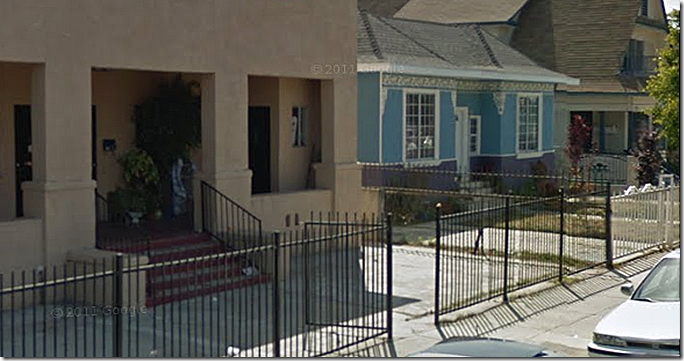 And here is the dump site today, courtesy of Google Street View. Beneath the stucco and aluminum windows, it’s the same house. 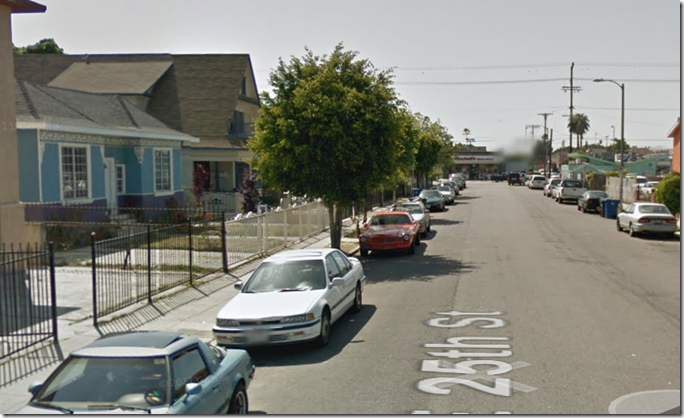 And what’s that at the end of the street? 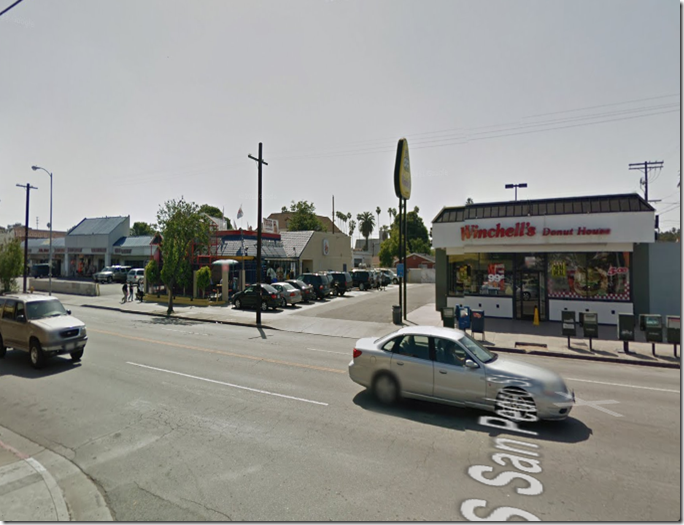 Why it’s a Winchell’s Donut House on South San Pedro. 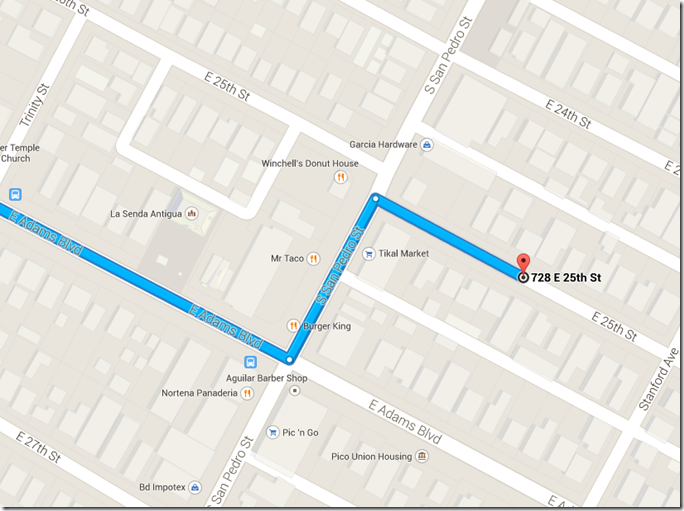 This is interesting. If our killer had been using Google Maps, he would have come up Adams Boulevard, made a left turn onto San Pedro, turned again on E. 25th Street and gone half a block to the dump site. 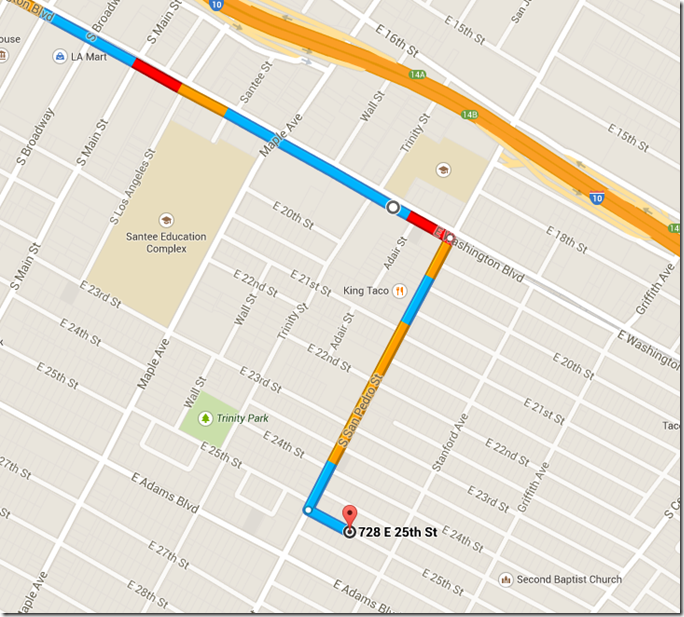 And what’s special about this neighborhood in the 1940s?

Los Angeles in 1944 did not have freeways, but it did have streetcars. 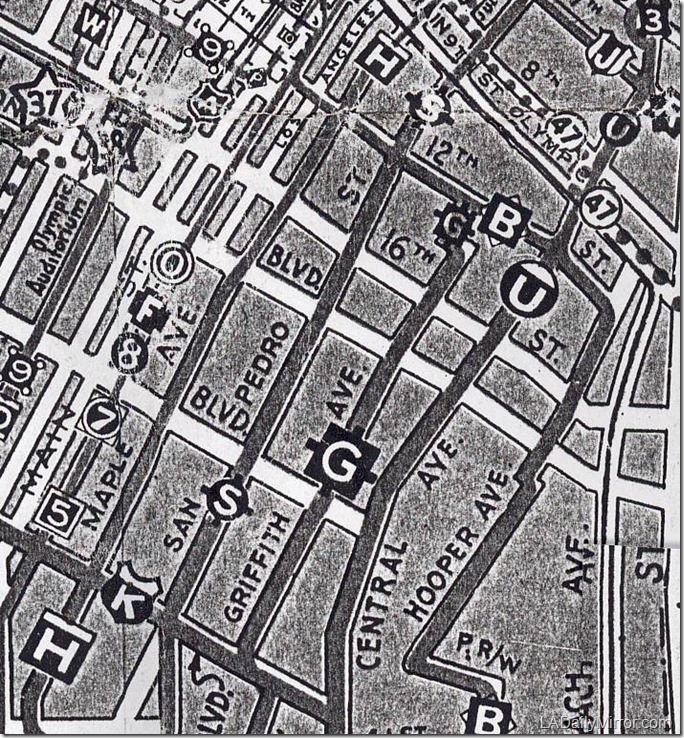 This 1938 streetcar map shows that the Bauerdorf car was dumped between two streetcar lines, the S Line and the G Line. (In case you’re wondering, my 1945 Thomas Bros. guide shows the routes remained the same.)

Half a block from the dump site was the S Line on San Pedro Boulevard, which went from Manchester and Firestone, up Central Avenue, jogged over to San Pedro at Gage, turned left on 7th Street, went east on 7th to Vermont Avenue, headed north on Vermont to 3rd Street, headed east on 3rd to Western Avenue and ended at Western and Santa Monica Boulevard.

The G Line, on Griffith Avenue, a block and a half from the dump site, was a shorter route, originating at Vernon Avenue and McKinley, and ending at 12th Street.

Of course, it’s entirely possible that the killer walked to San Pedro and hitched a ride or that he had someone pick him up. We will never know. But it interesting to note that there were streetcars nearby.