From the Vaults — ‘While the City Sleeps,’ Part V 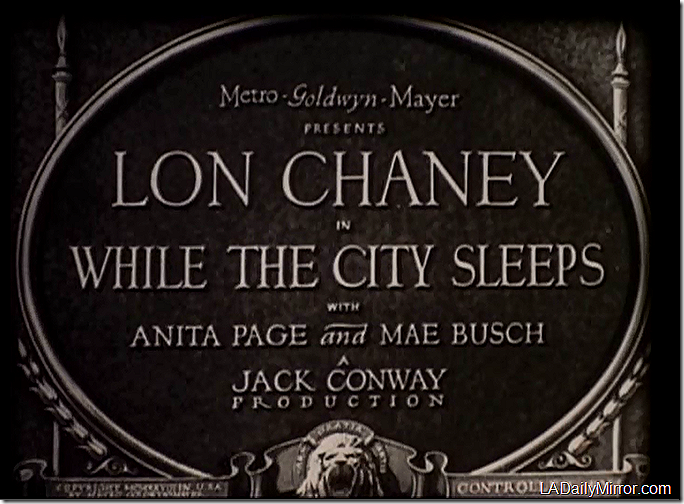 This is the last in our series of posts on the 1928 Lon Chaney film “While the City Sleeps.” We have previously looked at the history of the film, the plot (convoluted), the reviews (mixed) the condition of this print (damaged and missing about 20 minutes), and the use of Los Angeles’ then-new City Hall.

Today, we’re going to pull back the curtain on a bit of movie trickery used in the film.

Here’s the beginning of the sequence:

Lon Chaney, playing a New York police detective, climbs up on a roof with the Main Street side of City Hall in the background. Notice the Scribners sign. In case you are wondering, neither the 1927 or 1929 Los Angeles city directories list a Scribners.

Chaney walks out of that shot and into this one. But this location confused me:

There was no skyline like this on North Main in 1928. In fact there still isn’t. Notice that the Scribners sign has moved. Very mysterious.

Then I started wondering about this rather distinctive building: 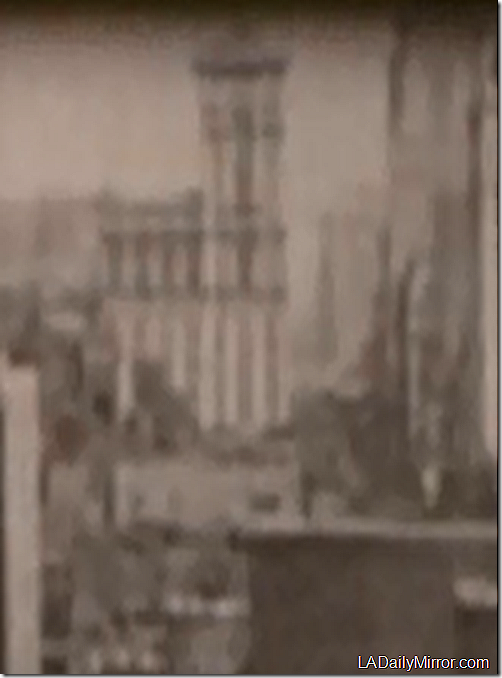 Which looks a bit like the old City Hall, which was still standing on Broadway between 2nd and 3rd in 1928. Was it possible that the continuation of the shot was a second setup on another building, shooting south on Broadway instead of north on Main? Theoretically yes. But where? And what about the Scribners sign?

A closer examination reveals that the building is not the old City Hall. 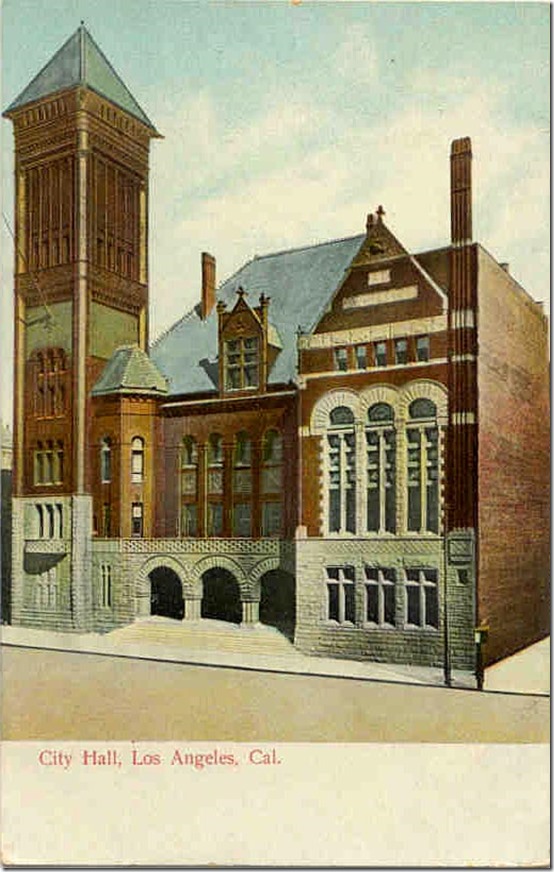 But the old City Hall was only building in Los Angeles that had that sort of tower. Hm.

Then there’s this sequence.

This shot from “While the City Sleeps” shows a bit of the Main Street side of City Hall and a sign for Harper & Reynolds.

Unlike Scribners, Harper & Reynolds was an actual business in Los Angeles. The 1927 Los Angeles city directory, thoughtfully placed online by the Los Angeles Public Library, shows that it was at 152 N. Main. So we can be reasonably sure that the building is real.

But if we are looking in that direction, we have a problem, because there were no skyscrapers in that area.

In fact, this is what it looks like now, courtesy of Google Earth:

What happened to all those big buildings north of the Civic Center?

Aha! Thanks to “Filming Locations in Los Angeles” by Karie Bible, Marc Wanamaker and Harry Medved, we have proof of what the movie makers did. On Page 10, there’s a publicity shot of the film crew on the roof of a building with City Hall in the background.

Here’s a detail of that photo showing the crew with Lon Chaney, left, and Wheeler Oakman.

And the way the shot appears in the movie.

In a detail from the publicity shot, we see the old Hall of Records behind City Hall.

But in the movie, there are other buildings and the sign for Scribners.  What happened to the Hall of Records?

I’m not an expert on special effects of the 1920s, so I can only speculate on whether this was a model, a “glass shot” (matte painting) or some other technique. But whatever was done, “While the City Sleeps” is an early example of the use of trick shots – remember that the movie was set in New York and required skyscrapers in the background — and can’t be taken as a historical document of Los Angeles as it was in the 1920s.

5 Responses to From the Vaults — ‘While the City Sleeps,’ Part V