Some people are lucky enough to work in a profession doing something they love, offering both pleasure and satisfaction. Others work at jobs that allow them to make a living while pursuing hobbies and passions. Samuel S. Hinds ended up doing both, performing in theatrical productions as a passionate hobby before turning it into his avocation and career.

Born on April 4, 1875, Hinds grew up in an educated, successful family. His father, Joseph, a lifelong friend of Mark Twain and Thomas Alva Edison, owned and operated a successful printing and lithography business in New York, later serving as president of the United States Playing Card Co. and the lithography company Russell-Morgan in Cincinnati. His New York printing company became the first business illuminated with electric lights by Edison in 1881. The senior Hinds proudly exhibited one of the three first lighted globes in his Pasadena house.

Samuel S. Hinds, left, with Warren William in “Wives Under suspicion,” in a photo listed on EBay as Buy It Now for $5.49.

Hinds attended and graduated from Phillips-Exeter Academy, Harvard University in 1898, and New York University Law School. While in school, he participated in theatrical classes and productions, but studied the law to make his father happy. After passing the New York bar, he served a few years as an attorney before moving to California in 1908 to take up practice. The young man settled in Pasadena, quickly becoming involved in theatrical productions throughout the city.

The attorney performed in the Hotel Maryland’s minstrel shows that raised money for charity, singing, acting in skits and performing monologues. As the March 4, 1909, Los Angeles Herald reported, “In the fun of the evening, George Clark, Sam Hinds and Dr. Earl Prince figured conspicuously.” The lawyer-thespian also participated in community theater, helping found the Pasadena Community Playhouse in the mid-teens, and serving on its Board of Directors by 1920. The group saw theater as “an art rather than as a business,” founded in response to the dramatic reduction or closure of touring theatrical companies, per the May 16, 1920, Los Angeles Times. “The Pasadena Community Playhouse Assn. springs from the desires of certain groups of citizens to unite on the civic services of educational recreation…” They were one of the first theaters in the country to recognize the active correlation between music and drama, employing music as background as it was employed in silent films.

While Hinds trod the boards at night, he served as a successful attorney by day, with offices at 117 E. Colorado in 1914, and 35 N. Raymond Ave. in 1918. His successful life allowed him to move from 149 S. Euclid Ave. in 1909 to 695 Prospect Ave. in 1914, and 880 La Loma Road by 1918. This house was constructed by the renowned Pasadena architects Marston and Van Pelt in grand English style. He served as a director of Annandale Gold Club and ran for justice of the peace in 1911. People everywhere respected the man, who didn’t take himself too seriously and possessed a nice, light comic touch.

The lawyer quickly became one of the Playhouse’s go-to leading men, a successful light comedy man as well as steady in serious dramas like the works of Booth Tarkington. After he married in 1915, his wife, Dorothy, joined Hinds on stage. They actively supported the Pasadena Community Playhouse with their financial contributions and their talents. In February 1921, Hinds starred in a revival of one of the organization’s first productions, “The Passing of the Third Floor Back,” a morality play, which the group performed during Lent. He excelled in portrayals of older, dignified men in plays like “The Admirable Crichton.”

Audiences particularly enjoyed his comic performances, giving Hinds large rounds of applause, particularly for shows like “Fashion,” a social satire from 1845 presented as originally as possible to productions of that time, a good old-fashioned melodrama featuring painted backgrounds, proscenium presentation, incidental music, audible asides and monologues presented as characters crossed the stage. The show revolved around a newly rich New York family who sees a bogus count courting their daughter and their money. 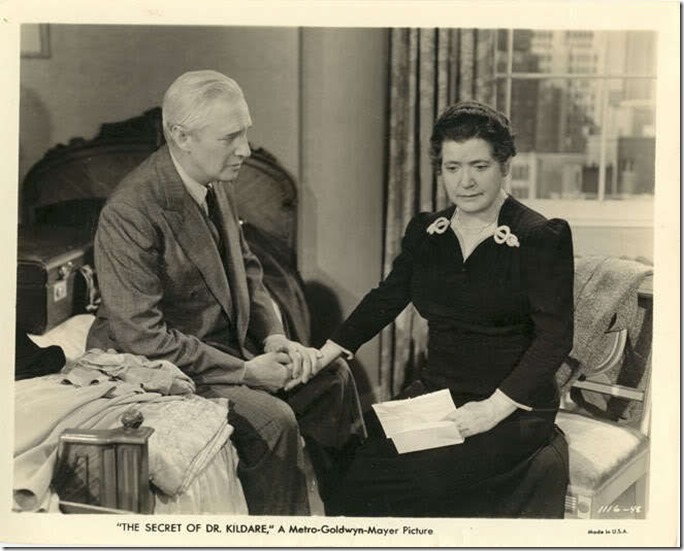 Samuel S. Hinds and Emma Dunn in “The Secret of Dr. Kildare,” in a photo on EBay with bids starting at $9.95.

As described in the 1924 Los Angeles Times’ review, “The Pasadena Players are endeavoring to give the play in as near the original manner as it is possible to do… Even the audience enters into the spirit of the occasion, hissing the villains roundly and loudly applauding the hero. Hinds’ count is greeted with jeers and derision from the audience. He is the typical villain with his swarthy appearance and the characteristic snarl when he’s foiled.” Hinds stole the show with his early version of Snidely Whiplash.

Hinds’ comic skills drew hearty affirmation on the radio as well. He performed comic monologues on KHJ in 1923 with the players as well as alone, raising money for charity and just for the love of performing. He found fame for his comic monologue explaining to the listening audience how to make lamp chimneys out of champagne bottles, this during Prohibition. He often performed as “Uncle Sam,” “Samuel S. Hinds of Pasadena,” on the radio, receiving a large wave of telephone requests for his hilarious skit. Hinds also emceed a radio program sponsored by the Broadway department store’s sheet music department, apologizing for sometimes mispronouncing the names of the composers and compositions.

In 1924, Hinds served on the Board of Directors for the Pasadena Community Playhouse during its successful drive to raise funds to construct the beautiful Spanish Colonial-style stage, rehearsal halls, and offices, which still stand. He even starred in the inaugural production at the luxurious new playhouse.

The Los Angeles Times reported June 14, 1926, on Hinds’ first appearance in film. Variety had noted, “Samuel S. Hinds, multimillionaire Pasadena lawyer, has embarked on a screen career. He has been cast for a role in “The Amateur Gentleman,” starring Richard Barthelmess, with Sidney Olcott directing for inspiration.

Hinds, active in little theater work in Los Angeles, will allow the film company to shoot scenes from the picture at his English estate in Pasadena.”

In 1927, the actor performed as Uncle Tom in a Pasadena production of “Uncle Tom’s Cabin.” Lawyer Hinds even performed on-stage with actor Paul Muni at the Pasadena Playhouse in August 1930 in “The Man Saul,” which Muni would later take to Broadway.

His wife, Dorothy, claimed cruelty when divorcing him and remarrying the same day in Reno to actor John Bell on May 19, 1930. She received sole custody of their 2-year-old daughter, while her parents received custody of their two older daughters. She claimed “that her husband was an attorney in name only and that she was forced to provide money for household expenses.” In just over a year, however, Dorothy and her new husband filed for bankruptcy in trying to cover their own debts.

Hinds suffered his own financial setbacks about the same time, losing his fortune some time after the stock market crash wiped out his assets and forcing him to sell his house. He decided to turn his enthusiasm for acting into a profession, starting over as a film actor earning $20 for appearing in “If I Had a Million” in 1932. At the same time, he donated his father’s Edison electrical equipment, which included a wooden fuse box and wooden sockets, to the collections of the Los Angeles Museum. In 1933, he played Abraham Lincoln in a Warner Bros. short that extolled the National Recovery Act, with Dick Powell proclaiming “The Road Is Open Again” in song.

Philip Dorn, left, and Samuel S. Hinds in “Escape in the Desert” in a photo on EBay listed as Buy It Now for $2.49.

‘Picture Play” magazine interviewed him in 1935, detailing his passion for performing at the Pasadena Playhouse and the necessity of screen roles. “There never was a time when Gilmor Brown, head of the organization, could not go to Mr. Hinds and suggest that he would like to produce a certain play but couldn’t afford the costumes, or the scenery, or the advertising, and receive the necessary financial aid.” Playhouse students like Robert Young, Gloria Stuart, Karen Morley, and Randolph Scott turned to him, a veteran of 46 productions, for advice.

Hinds spoke about how he entered pictures. “I thought it was a good time to change my profession. I decided I would become a movie actor. I had nothing to lose, for I had lost everything.” He noted how unhappy practicing law made him, while performing on the stage and screen brought him joy, though it had been really hard work to earn his place in filmmaking. Hinds mused, “I’m just a modest fellow. I don’t want the whole world. I’m grateful for my little success.” Hinds enjoyed playing character roles because they had more variety than straight parts.

Hinds’ dignified, respectable bearing and pleasing personality soon gained him plenty of nice character turns as doctors, lawyers, businessmen, government officials, and the like in shorts and features. The Los Angeles Times in 1935 recognized him as well as actors like Henry Armetta, Franklin Pangborn and Charles Butterworth for their busy careers offering steady support to big stars in studio films, performing in more than 25 films in two years.

Film co-stars proclaimed his endearing, likable and kind qualities, which mirrored many of the characters he performed on-screen. Jean Parker, who played with him in the 1933 production of “The Little Women,” told “Picture Play” how he brought her little snacks, and picked up a little book for her from a dime store. “He’s such a darling. And he’s a good actor.” 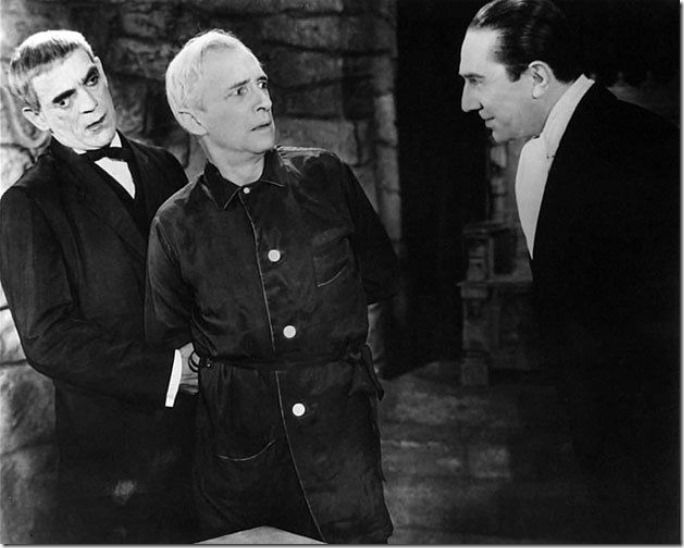 Samuel S. Hinds, center, with Boris Karloff, left, and Bela Lugosi in “The Raven,” in a photo on EBay listed as Buy It Now for $7.49.

Over the next 16 years, Hinds appeared in such classic films as “Gabriel Over the White House,” “Little Women,” “Lady for a Day,” “You Can’t Take It With You,” “Buck Privates,” “Scarlet Street,” “It’s a Wonderful Life,” and “Call Northside-777,” usually playing characters mirroring his background and personality, with a few shysters thrown in for good measure.

In 1940, he joined with actors such as Victor Jory, Dana Andrews, Byron Foulger, Charles Lane, Lloyd Nolan, Robert Preston, Onslow Stevens, Moroni Olsen, and others to form 18 Actors Inc., a professional acting co., in which to perform productions throughout Southern California. They produced and performed Vincent Carroll’s “Shadow and Substance” in Redlands, Ontario, Santa Barbara and Pasadena. The group would continue giving productions through 1950.

Hinds gave one of his last performances onstage as the narrator of Lionel Barrymore’s composition “Halloween,” for the Pasadena Civic Music Association’s 1946 Spring Music Festival.

Ironically, his former home on La Loma Road plays an active role in film and television shoots. The movie locations blog, I Am Not a Stalker, reports that the estate appeared in the 1985 film, “Alice in Wonderland,” the 1988 film, “Beaches,” and television shows “Columbo,” “Mad Men,” and “Parks and Recreation.”