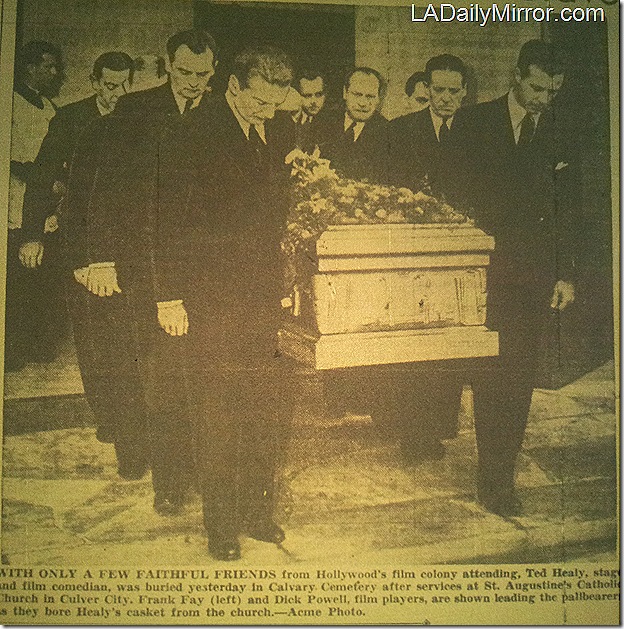 In case you just tuned in, we are nearing the end of a long journey that began in April, when I stumbled across a Wikipedia entry claiming that Wallace Beery was involved in beating Ted Healy to death in the parking lot of the Cafe Trocadero in December 1937.

In the previous post, we looked at the results from Healy’s autopsy and found that he died:

of acute toxic nephritis caused by acute and chronic alcoholism, which weakened the heart, kidneys and liver.

[Autopsy surgeon Dr. A.F. Wagner] declared no injury to the skull or brain had been caused by the blow which resulted in the laceration. There were no blood clots on the brain and there was no evidence of cerebral hemorrhage. (Los Angeles Examiner, Dec. 23, 1937)

They said good-by to Ted Healy yesterday the way he wanted it said.

In the little church of St. Augustine, within the shadow of the great studio where the comedian’s genius for buffoonery was captured on rolls of celluloid, his funeral services were held.

His friends were there, 300 strong.

Renowned and humble alike, they were bound together by their common affection for the laughing, nimble-witted fellow who jested at life until fate cruelly twisted his jest to tragedy.

There were men like John McCormack, who is a Papal Count as well as a famous tenor; Dick Powell and Bob Young and Jack Haley, film stars; Frank Fay, an insouciant soul like Healy himself.

There were women like Patsy Kelly, the comedienne, her face stamped with grief. Ted Healy’s first wife, Betty Nash, the vaudeville partner with whom he earned a million dollars, was there. Marcia Healy, who was his pal, as well as his sister, knelt near his bier and wept.

And, too, there were the kids who flock around the studio gate and with whom Ted Healy used to pitch pennies in idle moments.

Less than a mile away from the church, his widow, Betty Hickman Healy, nursed the baby, John Jacob, that was born to the Healys just a week ago today. She sent flowers, a great blanket of roses and orchids, to cover his massive silver-bronze casket.

Ted Healy was such a gay caballero of the theater that, despite the tragic circumstances of his death Tuesday morning, his friends who went to pay him last tribute could not affect the “dejected ‘havior o’ the visage.”

They chose, instead, to gather in little groups – there were so many theatrical faces that the steps of the church were like backstage at Keith’s in the old days – and remember Ted as they knew him.

His three stooges (a new set of stooges), Dick Hakins, Sam Wolfe and Paul Garner, wistful little fellows, abashed and bewildered in the presence of death, somehow epitomized the thought of the mourners.

“Ted was a swell guy,” piped Hakins, as the others nodded. “He was a real human being. I can’t believe he’s gone.”

Father John O’Donnell offered the Mass of Requiem. Clad in vestments of solemn black, he performed the rites of the church before an altar on which six tall tapers flickered.

The actor folk in the church joined haltingly in the prayers that were strange to many of them. They wiped away their tears almost angrily, as if tears didn’t belong at Ted Healy’s funeral.

“It is not the tradition of the church,” he said, “to turn these sad occasions into eulogies of the dead. We pray for the salvation of Ted’s soul and beseech Almighty God to grant him eternal rest and peace.

“It is fitting that he should rest here within the shadow of that great studio where his talents brought happiness to millions.

“I share in the loss you have suffered. We may listen for the voice that made us laugh, but who would dare call him back from that tabernacle to which he has been summoned.

“Ted, you have been called into conference with the Supreme Director. Let us hope your assignment will be one of joy and eternal happiness. God rest thy soul in peace.”

The acolytes in cassock and surplice, the cross-bearer, the thurifer and the priests surrounded the casket and walked with it to the door of the church, where Ted’s friends passed to watch him go by on the last journey.

Burial was made beside the grave of Ted’s mother, who died six months ago, at Calvary Cemetery.

Among those in the church were members of the casts of “Love Is a Headache,” the picture Ted but recently finished for Metro-Goldwyn-Mayer, and “Hollywood Hotel,” the Warner Brothers production which was previewed as the comedian lay dying.

I am retired from the Los Angeles Times
View all posts by lmharnisch →
This entry was posted in 1937, Film, Hollywood, Obituaries and tagged #Wikipedia, 1937, films, hollywood, Ted Healy, Three Stooges. Bookmark the permalink.

4 Responses to The Death of Ted Healy — Part 12