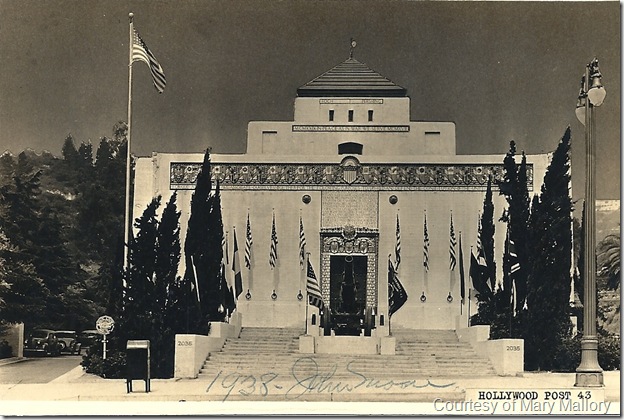 World War I was a bruising, mentally jarring affair for returning American soldiers. Dazed, hardened, in pain, the men looked for an opportunity to gather together with like-minded individuals for camaraderie, comfort and counsel. The American Legion was formed in 1919 to give all veterans a place to congregate together in fellowship as well as memorial.

Hollywood formed its own post in 1919, chartered originally at Toberman Hall at 6416 Hollywood Blvd. Space was small in their rented facilities, so the group built a boxing arena called the American Legion Stadium at North El Centro Avenue and Selma Avenue to bring in a steady income and raise funds for constructing their own headquarters. Timing was perfect; boxing ranked among Americans’ favorite spectator sports and profits soared. Weekly, if not daily fights, occurred at the stadium, with boxing legend Max Baer and others throwing punches. Soon, Hollywood American Legion Post 43 ranked as one of the wealthiest branches in the country.

With these funds, the post decided to build an elaborate combination Clubhouse/Memorial at 2035 N. Highland Ave. A building committee, led by Cmdr. John D. Home, consulted with architects before hiring the firm Weston and Weston to design a classical edifice for $250,000. In early November, 1928, Home announced that plans had been finalized, and after sign-off by the committee, construction would begin.

As the Nov. 4, 1928, Los Angeles Times described it, “The building will be entirely of reinforced concrete, military in character and a dignified solution to the problem of combining a memorial and a clubhouse.” Only ornamentation that possessed some military character or tradition would be included on the exterior of the building, particularly decoration that connected to World War I. All ornamentation would be finished in a bright glazed polychrome terracotta, and quotes regarding character and service would adorn the building.

The interior of the regal pavilion would include offices, conference rooms, a library, a lodge room with stage, billiard room, game room, locker room, gymnasium, men’s and women’s lounges, trophy room and a rotunda. Plans allowed for such possible future additions as a swimming pool, tennis courts and squash courts.

To celebrate its patriotic function, Post 43 announced July 4, 1929, as a dedication date, particularly to give time to transfer their seven-ton WWI trophy, a giant German gun and carriage, from El Centro to the new headquarters. On June 9, they requested permission from the city’s Police Commission to shut part of Highland Avenue at night to move the gun, which was soon granted.

More than 1,000 people attended the elaborate dedication of the neo-Egyptian fantasy-style building, somewhat resembling downtown’s Central Library, on July 4, with Los Angeles Mayor Porter speaking and Richard Tucker acting as master of ceremonies. The solid structure was dedicated as a place for the American Legion “to serve the public fearlessly and well, to the common service of our country and to the memory of our departed comrades.” The Legend – “In Peace as in War We Serve” emblazoned the top of the tower. The $265,000 monument would serve 1,285 registered members, making the group one of the largest in the state. In 1930, the tile work won an American Institute of Architects award.

Many members worked in the motion picture industry over the years, including Ronald Reagan, Gene Autry, Adolphe Menjou, Conrad Nagel, Dick Lane and Clark Gable, and the building itself starred in the 1938 feature film, “Squadron of Honor.” Post 43 recognized top film actresses as well. In 1935, in conjunction with the release of the film “The Little Colonel,” the post appointed child actress Shirley Temple an honorary colonel. Later, During World War II, such actresses as Carole Landis, Judy Canova, Jane Withers, Dorothy Lamour and Hedda Hopper were also appointed honorary colonels for their patriotic service.

On April 2, 1952, Post 43 invited airline mogul Howard Hughes to speak on the issue of filmmaking and communism. During his speech, Hughes’ announcement, “If there were only one communist in Hollywood, that would be one too many,” drew loud applause.

The group denounced actor Charles Chaplin in the early 1950s, pushing for his deportment from the United States in 1950, and picketing his film “Limelight” in 1953, even though he had raised millions of dollars in bonds for the war effort during World War I.

The group honored Hollywood pioneers and the film industry later in the 1950s. Post 43 recognized builder Charles E. Toberman for “civic betterment” on April 16, 1957, with film pioneer Jesse L. Lasky, among others, making speeches in support.

In honor of the motion picture industry’s 50th anniversary, Post 43 paid tribute to actor Theodore Roberts on Nov. 20, 1957, for his instrumental work in organizing a benefit show which started the post in 1919.

By the late 1950s, with the decline of boxing and the rise of television, the American Legion sold the boxing stadium because of growing deficits. To help raise revenues, the group slowly began leasing its clubhouse for special events, such as plays, concerts, and meetings. The long running mystery play, “Tamara,” ran for years in the 1990s.

Los Angeles finally recognized the beauty and elegance of the neo-Mesopotamian Art Deco structure in 1989, naming it the city’s Historic-Cultural Monument No. 462 on Nov. 3.

The imposing monument still proudly looms over Highland Avenue, a fitting memorial for those who fight to preserve and defend the country.

Ps: Mary notes that Hollywood Heritage will be holding an event Wednesday at the Hollywood American Legion Hall, 2305 Highland Ave., celebrating the Hollywood Canteen.  Tickets are $15, $5 for members.